Today we’ve released the video about Expedition Underway, our expedition in Belize, studying marine mammals. Expedition Underway, our first research-under-sail expedition, conducted in partnership with The Moorings, headed to Belize for some pioneering marine mammal research. Surprisingly, there is very little known about the dolphin populations in the coastal waters of Belize in the western Caribbean.

The Moorings was thrilled to help support this groundbreaking research, and provided a 48-foot Leopard catamaran that served as our research platform.

It is hard to believe, but up until our survey there had been no systematic study on population data of cetaceans in the offshore waters of Belize. For seven days the team conducted the first systematic survey on cetaceans in Belize. We counted whales and dolphins to see how many there are living in that region.

We sailed along transect lines and logged cetacean sightings, collected tissue samples, recorded audio samples, and took aerial and surface photos to identify the animals and observe behaviors. The photos are then cataloged so that by identifying individual dolphins, scientists can begin to determine the population size and study their range and behavior. 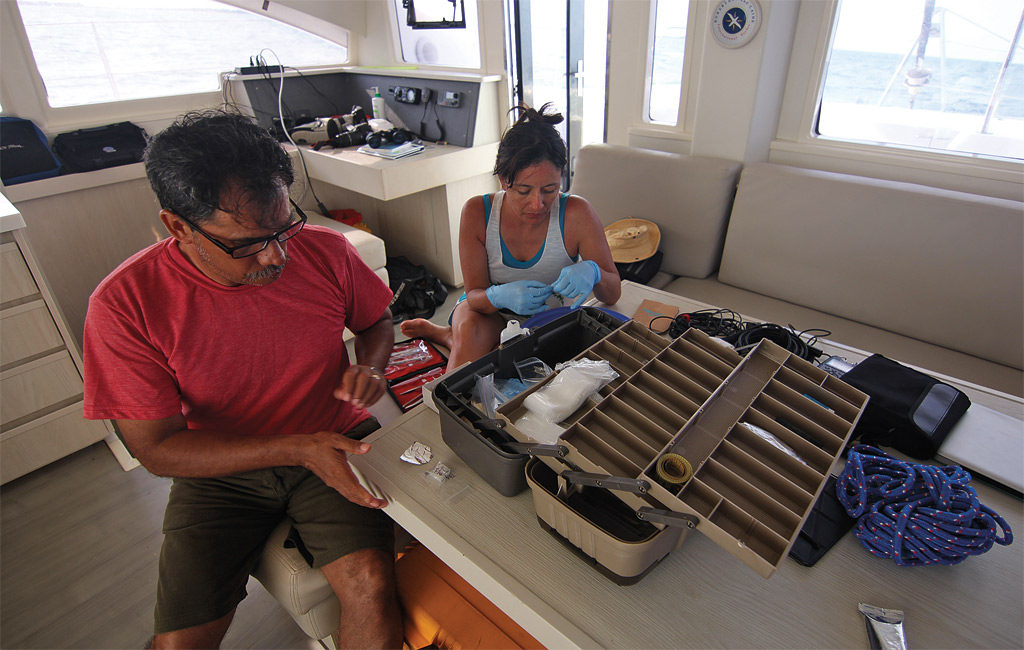 “The skin and tissue samples are used to gather baseline genetic information as well as measure toxin levels,” explained Dr. Nataly . “Because dolphins are top predators in the food chain, they accumulate a lot of toxins and contaminants. Measuring the concentration of these contaminants is a good indication of the status of the ecosystem in general.”

“It will help us determine if these individuals here in Belize are at more risk than other populations and be able to advocate for their protection in an area that doesn’t have it yet,” added scientist Eric Ramos.

To get a better look at dolphin behaviors, we used a drone equipped with an HD camera for aerial surveys. “It gives us two things. First, we can better determine how many animals we are seeing,” Eric explained. “Second, we can observe their behavior. We know very little about the behaviors of the animals that live in deep waters. For instance how they organize themselves, or what kind of social interactions they engage in.”

Dolphins make sounds for communication and echolocation, a method for locating objects by producing a short blast of sound, similar in function to the depth sounder of a boat. Dolphins do this to gather a wide variety of information about their environment. Using a hydrophone, we recorded a cacophony of clicks and whistles. Long siren sounds, rapid machine-gun clicking, and slow popcorn pops.

We surveyed 267 nautical miles, tirelessly observed for 31 hours, documented encounters with nearly 150 marine mammals using seven aerial drone surveys, 1,200 photos and four hydrophone deployments. To effectively manage and protect cetacean populations, we need to know things like animal abundance, their range and how these phenomenon change over time. To do that, it starts as all scientific inquiry does, one piece of data at a time.

We plan to return to Belize in 2017 to continue this important research. Right now the Belize waters are being threatened by seismic airgun testing in the search for new oil. This ocean noise pollution is devastating to marine mammals, as they use sound for navigation, communication, and daily routines.

This site uses Akismet to reduce spam. Learn how your comment data is processed.

This Is A Custom Widget

This Sliding Bar can be switched on or off in theme options, and can take any widget you throw at it or even fill it with your custom HTML Code. Its perfect for grabbing the attention of your viewers. Choose between 1, 2, 3 or 4 columns, set the background color, widget divider color, activate transparency, a top border or fully disable it on desktop and mobile.

This Is A Custom Widget

This Sliding Bar can be switched on or off in theme options, and can take any widget you throw at it or even fill it with your custom HTML Code. Its perfect for grabbing the attention of your viewers. Choose between 1, 2, 3 or 4 columns, set the background color, widget divider color, activate transparency, a top border or fully disable it on desktop and mobile.
Go to Top